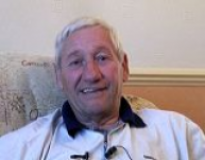 Age at interview: 68
Brief Outline: Invited to be screened for bowel cancer in 2003, aged 65. The result of the Faecal Occult Blood (FOB) test was normal. Screened again in 2005, and had to repeat the test. The result was normal.
Background: A white English man, a retired painter/decorator, married, with 3 children.

The leaflet is brilliant. It tells you what the test is all about.

The leaflet is brilliant. It tells you what the test is all about.

View topic summary
SHOW TEXT VERSION
PRINT TRANSCRIPT
What did you make of the information leaflet they sent with the invitation to be screened for bowel cancer?

Very good, very good they, they tell you roughly what it is and what it's about and the pamphlet what you get with it it's brilliant you know people should read it and they'll know.

Was that about the right amount of information or would you have liked more or less?

No I think that, what they send you in the pamphlet comes right to the point and they just tell you know and what they test is all about.

He suggests screening for bowel cancer is money well spent and might reduce pressure of work for...

He suggests screening for bowel cancer is money well spent and might reduce pressure of work for...

Oh it's got to, it's money well spent. That's one thing I'll give the government if the, you know it's one thing that is money that's well spent, on screening. It's, it puts a lot, don't put so much pressure on your GP if he, because he most likely gets the results of them anyway your GP, and then say right he's pretty well clear you know. They haven't got to worry having the patients coming in saying oh I think I've got this, I think I've got that and going through it all, go and see a specialist and that. The screening, straight forward, straight forward letter, do it, send it away, simple as that. No problems at all.

So have you got a message for people who might be looking at this and wondering whether or not to take part?

If you are thinking, thinking of not taking part in this screening, I think there must be sommat wrong with you because the way I look at it it's for your own benefit and it's for, it is your own benefit but also I think it's got to be in your mind you know if, if you don't want to take part, I just can't understand it because the actual screening is so simple, that even a child could do it. And I advise you if you get a chance for screening I'd advise anybody to have it done.