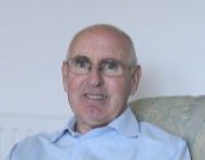 Age at interview: 67
Brief Outline: In 2001, aged 64, he was screened for bowel cancer. The result of the Faecal Occult Blood (FOB) test was abnormal. After a colonoscopy he was diagnosed with cancer and had surgery.
Background: A white Irish man, a retired maintenance worker, single, no children.

In 2001, when he was aged 64, he heard that other people in the area were being screened for bowel cancer, so he asked his GP about it. His GP arranged for him to be sent a screening kit. The result of the Faecal Occult Blood (FOB) test was abnormal, so he was offered a colonoscopy. After this investigation he was diagnosed with bowel cancer, and treated with surgery (a right hemi-colectomy). Since then he has had two other colonoscopies, during which polyps have been removed and diverticulitis has been diagnosed. He now feels well.

He found the bowel preparation difficult because his double doses of laxative caused pain as well...

Show in context
SHOW TEXT VERSION
PRINT TRANSCRIPT
So you went to see the nurse and did she explain what a colonoscopy was?

She did and she explained it all to me and she had, she made the appointment to see the consultant for the colonoscopy. So I was fine with that.

And can you tell us what it was like to prepare for the colonoscopy?

It's, that's one of the most difficult parts of it I find because I'd never, it's quite a severe, the purging is, you know to have to experience it for the first time it's quite difficult.

Can you go into detail about that please?

Yes you know they, it just runs through in the end and it's quite painful.

What do you have to take?

I had, it's Klean-Prep, Senokot I think it is and there's three different things, I can remember the other one, but you have to take them within a certain period, within twenty minutes the Klean-Prep and, on the follow up that I, on some of my colonoscopies they discovered I had diverticulitis as well which, so I'm now on double Prep which is very severe, I have to take two of everything which I will coming up for my next colonoscopy.

You start off I think 2 o clock the day previous, and you take the last lot at 7 in the morning on the day of your, of your treatment.

And how soon would that take effect?

Oh the second lot which I think is called Picolax, the effect takes place within an hour. But the Klean-Prep on the morning of the procedure is very quick, perhaps less half of that, half an hour.

So very quickly you find you have to go to the lavatory.

You're more or less positioning yourself quite close to it yes. So the last time I was in, I was in hospital and they gave me a room next to a toilet which they reserved for me which was lovely, it was great.

And you say it's quite difficult, can you say a little bit more about how it feels?

Well it's got a horrible taste, especially the Klean-Prep. I know they say you can you know put orange juice in to dilute it and all that but it's still a, it's still pretty messy stuff.

He went to the hospital to get his results a week after the colonoscopy. The doctor explained...

Show in context
SHOW TEXT VERSION
PRINT TRANSCRIPT
And then he [the doctor] asked you to come back a week later to talk about it?

To talk about it yes, I mustn't miss that appointment.

And what happened on that occasion?

On that occasion he told me that it was positive and that I would need to have surgery to remove the growth.

So did he say it was bowel cancer at that stage?

And what were your feelings then?

Well I was, I was okay with it, you know you just gone along with it don't you and place your, yourself in their hands and know they're going to do the best thing for you and I was quite philosophical about it you know. I had no problems with that at all.

And then you had to go back for the operation.

Went back for the operation, yes.

He had a right hemi-colectomy to remove part of the bowel. When he woke up he felt no pain...

Well they put me on medication for my atrial fibrillation and it must've helped somewhat. They just, you know probably had the courage to say we're going to do it [the operation] because if one doesn't kill you the other one will anyway so we'd best have a go and it turned out brilliant.

So what was the operation called, did you say?

Can you explain to people what that is?

I would imagine myself it cuts part of your large bowel away and reconnects it. I didn't have to have a stoma so that was, that was a plus. Most people in, when, who were in with me had stomas and they found them very difficult.

And since then did you have to have any other treatment?

No, I didn't have to have any other treatment because he explained to me the surgeon, the tumour hadn't grown through the outside, into the outside skin, it was only on the inside so he felt that it was, it would be no point having treatment. I've been screened for liver to see if it had affected my liver in between, which to say is most likely the next part it would attack.

It hasn't no, so I'm now coming up for my five year colonoscopy and hopefully, fingers crossed, that may turn out to be okay.

So what was it like recovering from the operation?

It was brilliant, I had no pain whatsoever. I had no stitches, you couldn't believe it, it was unbelievable.

I think they removed the large bowel and just cut the piece and re, resection it and put it back in and just, it's just a small wound.

Yes correct. You had no stitches at all. I had no drains, no.

How was it held together did they…?

Can you say a little bit more why you found the operation painless?

Put my glasses away. Well it was the form of anaesthetic. The anaesthetist asked me what kind of pain killing and relief I wanted and I left it to him. So what he done was wonderful.

Did he give you an epidural?

An epidural yes and that, I believe it's the reason it's not used more intensively is people aren't trained on the wards and they only can do it in the intensive care.

So when you had your surgery for the bowel cancer you had an epidural?

And that made it fairly pain free afterwards?

It did, it did, I couldn't believe it. The first thing I done was put my hand down to see [laughs] you know had I got a huge wound or pain and there was nothing.