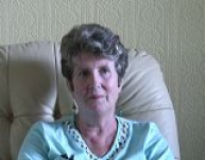 Age at interview: 58
Brief Outline: When she was first invited to be screened for bowel cancer she declined, but later, in 2006, when aged 58, she decided to do the Faecal Occult Blood (FOB) test. The result was normal.
Background: A white English woman, a retired teacher, married with 3 children.

When she was first invited to be screened for bowel cancer she declined. Some time later she had a routine mammogram with an abnormal result and had to have a lumpectomy. This experience made her think that it was better to find a problem in its early stages. Thus in 2006, when she was invited to take part in screening for bowel cancer for the third time she decided to do the Faecal Occult Blood (FOB) test. The result was normal.

View topic summary
SHOW TEXT VERSION
EMBED CODE
PRINT TRANSCRIPT
Can you remember your feelings about the information that came with the kit?

Well yeah I thought it was very straightforward, I read it through and made sure I'd got everything prepared. It told you what to do, it told you exactly what to do, what to do first and how to set it up and everything and I did all that, and yes pretty straight forward, when I did it.

She ignored the invitation at first because she thought the whole idea disgusting.

She ignored the invitation at first because she thought the whole idea disgusting.

View topic summary
SHOW TEXT VERSION
EMBED CODE
PRINT TRANSCRIPT
Well I was invited to take part in the screening when it first came into our area. I received the kit, I had a look at it and I decided no, I didn't want to do it, I thought it was pretty disgusting really so I decided not to do it. My husband did his and sent his off. I had another kit a few, a couple of weeks later saying may be I hadn't received the first one and so they'd sent this one and I still didn't do it. Then I think when the next kit came a couple of years later I still held out not to do it, and my husband was telling me, 'You ought to do it.' And I said, 'No I don't want to do it, it's just not nice.' And he said, 'No neither is bowel cancer, you ought to do it.' But I still put it off and it wasn't until nearly two years ago now I was called, recalled from a routine mammogram and I just had to have a lumpectomy in the end, but that was the thing that jolted me into thinking well this was picked up so early may be I ought to do the bowel cancer screening when it comes again. And I said to my husband,' I will do that if it comes again.' And he said, 'Yes you really must.' And it came earlier this year and I did it. I didn't find it pleasant but I thought yes I've got to do it and so I did do it.

You said you sort of felt it was disgusting, can you say a little bit more about your feelings at that time?

Well [laughs] I don't know, it's, I don't think it was just embarrassing I just thought oh not, not very nice to have to do that. And when, and I said to my husband, 'Oh no I don't, I don't fancy doing it,' and he said, 'Well you're changing the grandchildren's nappie's all the time, what's the difference?' And I said, 'Yes but I don't have to go ferreting around in that.' So that's, I just didn't like the idea of it.

Her husband's results took two days and hers arrived after three days. She was initially alarmed...

Her husband's results took two days and hers arrived after three days. She was initially alarmed...

View topic summary
SHOW TEXT VERSION
EMBED CODE
PRINT TRANSCRIPT
And then you sent if off by post?

Very quick indeed, I was impressed.

Three days after you sent it.

Yes because they did say it could be two or three weeks I think it said on the information it could take. So when it came back so quickly that first one I just assumed the worst. But they were just being very efficient, it was excellent.

Do you think that's the best way to get results, through the post, or would you rather you got results in a different sort of way?

Yes I think that was fine coming through in the post like that. I wouldn't have liked to have to go to a surgery or hospital for the results because I think you, you get in more of a state than just a letter coming through the post.

The letter giving her the results reminded her to look out for symptoms of bowel cancer, such as...

The letter giving her the results reminded her to look out for symptoms of bowel cancer, such as...

Yes it, it was very good because it said although on this occasion, well it didn't say although, but it makes you think that just because on this occasion everything was okay it's, it doesn't mean that you don't look out for any other signs or symptoms and it gives you a list of what the symptoms could be. So you don't sit back and think, 'Oh I've done the test, I'm okay'.

There's still more things that you can look for.

Can you remember what sort of things those would be?

The main one I think was any blood in a motion and significant patterns, changes in motions, that kind of thing.

And did that letter affect how you think about what happens in the toilet on a day to day basis?

No not really, no because [laughs] I, I usually have very regular sort of toilet habits and it, no it hasn't made any made any difference I, well I suppose in a way I always make sure that there's no blood, that's the thing, but I don't very often have a change of pattern unless I'm not very well.

So it's made you more aware.