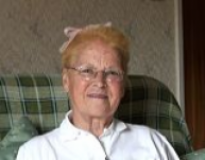 Age at interview: 70
Brief Outline: Screened in 2001, aged 65. The result of the Faecal Occult Blood (FOB) test was normal. The result of another test in 2004 was unclear, so she repeated it, after following a special diet. The result was normal.
Background: A white British woman, a housewife, widow with 3 children.

At first she was anxious because she had arthritis. She also thought that screening might be ...

At first she was anxious because she had arthritis. She also thought that screening might be ...

View topic summary
SHOW TEXT VERSION
EMBED CODE
PRINT TRANSCRIPT
Well it was back in 2004 when I received a letter through the post to, and was invited to take part in the screening for bowel cancer. I was a bit anxious because having rheumatoid arthritis in my wrists I find things in the bathroom very difficult and painful and but I decided I'd go along and endure it and do it. In the envelope was varying things with instructions as to what to do. It all appeared to see, to be a bit messy but I thought well I must do this, other people are perhaps doing it and I must do it. And so with pain and it took a bit of effort and time I did and put it in the post and sent it away. Now I have one or two problems with my medication, upset the bowel a bit and I was rather anxious because there could be something wrong. But I was so relieved to get the result to say that it was clear.

Excellent, thank you. So what was your initial reaction when you got the invitation to be screened through the post?

Oh what's all this about, what do they want now? Oh horrible [laughs].

Why do you say horrible?

Well it's a very personal private part of you that you have to do and it's just, it could be smelly and not nice you know. And I think of people too who will have to test it [laughs], yes, yes.

She took part in the pilot programme. It required some dietary restrictions because it was...

She took part in the pilot programme. It required some dietary restrictions because it was...

View topic summary
SHOW TEXT VERSION
EMBED CODE
PRINT TRANSCRIPT
I was invited to take part in the test in 2001 and it came back clear. I was very pleased about that and then I had another one in 2004 which wasn't clear and they sent me a letter to say that I should do it again and to adjust my diet and not to eat red meat and colourful vegetables like broccoli and tomatoes and vitamin C supplements. And the result from that then was clear, but they just wanted to be sure because some of these things can colour the motions or do something and it makes it look like there's problems.

The painful joints in her fingers and thumbs made it hard to hold the cardboard sticks to...

The painful joints in her fingers and thumbs made it hard to hold the cardboard sticks to...

View topic summary
SHOW TEXT VERSION
EMBED CODE
PRINT TRANSCRIPT
Can you please tell me, given that you've got problems with rheumatoid arthritis, how this made it a little bit difficult for you, but you managed it?

The joints in my fingers and thumbs are very painful and to hold the spatula and to retrieve the sample and to use the toilet paper was painful but it can be done and I managed. The thumb and the finger to hold the spatula was the most painful I think, but I coped and you just, it's just momentarily, it goes off again, I have these pains any time, anywhere so'

What did you have to do exactly with the spatula? Can you explain for people who are not sure what they have to do?

Well you have to retrieve a sample from the toilet paper that you have cleaned yourself with and put it into the, the sample pack that was sent. I did that three days in succession and in the morning, it can be done any time but I found it, that was when I moved my bowels and I did it then and while I thought about it.

So each day, each morning you took a sample, using the spatula, and put it in the test kit?