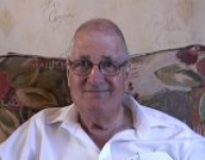 Age at interview: 70
Brief Outline: Screened in 2000, aged 64. Faecal Occult Blood test (FOB) test was normal, but later he noticed blood in his stools, was referred to a consultant, diagnosed with cancer, and treated with surgery.
Background: A white British man, a retired engineering manager, widower with 2 children.

He was invited to be screened for bowel cancer in 2000, aged 64. The result of the Faecal Occult Blood (FOB) test was normal. Six months later he re-read the letter that he was sent with the result of the test and noticed that the symptoms of bowel cancer include blood in the stools. Over a period of six months he noticed that 90% of the time he had blood in his stools, so he consulted his GP, who referred him to a consultant. In November 2001 he had a sigmoidoscopy, followed later by a colonoscopy, during which a biopsy was taken of a polyp. Cancer was diagnosed, and in 2002 he was treated with surgery.

The letter said that the result of his test was normal. Six months later he re-read the list of...

The letter said that the result of his test was normal. Six months later he re-read the list of...

The pilot scheme for mass screening of bowel cancer was introduced to the West Midlands in the year 2000. This involved only people who had reached the age of 60 and over (…). Having reached the ripe old age, I was thus invited to take part and was delighted when the result came back giving me an all clear. Life then carried on as usual and at the time, something like 6 months later, I happened to be cleaning, clearing out paperwork from my writing bureau and I came across the document which I'd received, giving me the all clear. And having read it again I found that it contained a list of symptoms that give an indicator of bowel cancer, those being blood in the stools, a change from constipation, from normal stools to constipation or diarrhoea, pain in the abdomen and loss of weight.

At that point in time I decided that it would be little or no inconvenience to check my own stools, and I proceeded to do this on a daily basis. It became, it was important to me that I carry out this exercise over a fairly long period of time because to rush to the doctors at the first sign would really have only been negative. And I continued to check and I was quite surprised to find that it [blood] wouldn't necessarily be there every day, it may in fact not be evident for periods of up to five days.

This is a little bit of blood?

Yes. In actual fact I carried out the exercise for a period of six months so it was June 2001 when I reached the conclusion, I came to the final conclusion that in fact it was time to go and see my GP because the evidence of blood was there at least 90% of the time over that period.

So what happened when you went to the GP after the six months?

Well the GP hasn't obviously got at his disposal the sophisticated kit that the consultant can use to examine you so all he can do is use one of his digits.

Give you a rectal examination. My doctor having done that already, knew, because I'd told him obviously that I'd been checking myself for six months anyhow, and he said, “Well you've obviously taken a sensible view of doing the sampling because you've done it over that period of time, and although I can't confirm that you've got it [cancer] I am going to, I'm going to refer you.” Which he did, and I subsequently saw the consultant, probably a couple of months later and I had the sigmoidoscopy.

He had a colonoscopy without sedation because he wanted to know what was going on. He did not...

He had a colonoscopy without sedation because he wanted to know what was going on. He did not...

View topic summary
SHOW TEXT VERSION
PRINT TRANSCRIPT
And then did you say you had a choice of whether you had a sedative or not when you got to the hospital?

Yes I was given the choice of having a sedative. I chose not to have it, I'm always interested in things I suppose, I know an awful lot of people who haven't had the sedative but, but you needn't worry if you, if you want to be sedated they, they offer you that chance, that opportunity sorry.

And you said that you could see what was happening on the television screen, was it a special screen so you could see exactly what the doctors were seeing?

Yes in fact they encourage you to have, they tend to encourage you to have a look at it but to be perfectly frank with you, we're not experienced in that sort of field so to be honest I really didn't know what I was looking at. Trying to pick out, for example a polyp, I wouldn't have know if, if he found one or not. But it was just, it was just interesting to watch it. It also takes your mind off what they're doing.

And what does it actually feel like to have a colonoscopy?

No problem whatsoever, you don't feel anything.

It didn't feel uncomfortable at all, and that's without sedation.

The doctor told him that he had cancer and would need surgery as soon as possible.

The doctor told him that he had cancer and would need surgery as soon as possible.

View topic summary
SHOW TEXT VERSION
PRINT TRANSCRIPT
Can you tell me how you got the, the news there was a problem?

Right well the news came via a phone call from the consultant's secretary, to which I responded by making a call back because I, I wasn't in at the time that the message was left. So my son and I then duly went down to see the consultant, the following day, and he said to me, he said, 'I'm afraid you've, you've got a cancer. What do you think?' I said, 'Well there's only one thing I can think of we'll have to get on with it.' And he said, 'Oh right, oh that's good.' And he said, 'Can you, can you come in this Saturday.' It was as quick as that. And unfortunately I couldn't because my wife had just died, and we, we were arranging the funeral and the funeral was to be on the Friday prior to the day that he wanted me to be in hospital so I said, 'Could you delay that, for obvious reasons?' And he said, 'Well I'm going away for a fortnight.' So I said, 'Well that's fine, two weeks' time, if you can arrange that for when you come back from holiday then fine I'll come in then.'

That must have been a very difficult day for you?

Well I think possibly with what was going on with my family problem, with my wife dying, that probably took precedence to the cancer.

After the operation he was in the high dependency unit for about 12 hours, then in an ordinary...

After the operation he was in the high dependency unit for about 12 hours, then in an ordinary...

View topic summary
SHOW TEXT VERSION
PRINT TRANSCRIPT
During sedation therefore one really doesn't, doesn't know just exactly what is taking place. You're obviously out to the world. I'd no idea how long the operation took. No doubt, no doubt that's a variable thing depending on, on the seriousness or the size of the tumour. In my case I was fairly fortunate in as much that they appear to have been able to cut out all of the tumourous material before it had sort of I can only say gone on the march. The first thing that happens to you after you've had the operation is that you, you go into a heavy dependency unit which is a, if you like a phase, a stage down from intensive care. But it is, to give you the initial care after you've had the operation. I think I was in there for something like twelve hours and then from that point I then went into a ward and I was in there for two weeks prior to coming home. When I got home arrangements were made for nurses to come in and attend to the wound, which you've obviously got when they've been operating. The other pleasant surprise was the, my GP actually turned up the same morning to see me. That came as a big surprise I was most impressed.

Did you have to have a stoma for a while or not?

No I, I was extremely fortunate in the sense that the, the polyp was, as I say in that bottom section of the colon. The only sort of if you like challenge to the surgeons there is, is whether they've got enough bowel when they've removed the tumour to be able to stretch your intestine to sort of join up with your rectum. I mean there's a possibility that they can't, there's always a possibility that they can't do that. But no I, I mean I must be an extremely lucky chap.