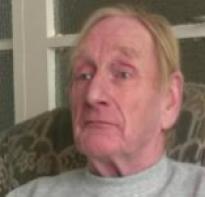 Age at interview: 69
Age at diagnosis: 53
Brief Outline: David, age 69, was diagnosed with asthma at age 53. He is white British, married and has three adult children. He works as a government researcher. David’s asthma is mainly triggered by cold weather and wind. During summer he generally doesn’t experience symptoms. Since his diagnosis David’s asthma has become worse and he has recently been diagnosed with COPD. He attributes the onset of his asthma directly to the fact that he was a smoker, and gave up smoking soon after the diagnosis.

David was diagnosed with asthma when he was in his mid 50’s. At the time he had been taking part in a cross country run but found himself feeling unusually breathless for some time after the run. He visited the GP and was diagnosed with asthma. David usually only experiences symptoms during the winter months when the cold and wind will trigger his asthma. If he gets a cold or chest infection sometimes he finds that the prescribed inhalers don’t work as effectively and he may need to take a course of oral steroids or antibiotics to help clear things. He has had a few occasions where the wheezing and breathlessness has become so bad that he has been to hospital to be given a nebulizer, but he has never had to be admitted for any length of time with his asthma.

David says that when he was first diagnosed he was given very little information or support about asthma and his condition was not monitored. Nowadays he sees the asthma nurse at his GP practice annually for a review and although he feels that it is not always clear whether or not an asthma nurse has a special qualification, that generally it can be helpful to have somebody in a health practice who is designated to take care of asthma patients.

David was keen to point out that asthma is a very individual condition and people experience it differently and the symptoms, triggers and severity can vary enormously. David attributes his asthma diagnosis to smoking, and says that in the years since he was diagnosed his lungs have deteriorated and his asthma is worse. He gave up smoking soon after he was diagnosed on the advice of his GP. More recently he was diagnosed with COPD. Although David knew about asthma because his children all had it, he was surprised to be diagnosed with it so late on his life, especially as he says he was always fit and healthy up until that time. However he feels that he generally has his asthma controlled and that it doesn’t interfere with his life too greatly. David has become involved with Asthma UK as a volunteer and sometimes gives talks to groups of people to help explain about asthma. David feels that generally asthma has not been taken particularly seriously by health professionals and government, but he feels that things are gradually changing and it is gaining a higher profile in terms of the development of new treatments and health policy.

Asthma rarely troubles David in summer but in winter cold or windy weather will trigger it and he may need extra medication.

Asthma rarely troubles David in summer but in winter cold or windy weather will trigger it and he may need extra medication.

View topic summary
SHOW TEXT VERSION
PRINT TRANSCRIPT
I’m not a person that gets terribly severe asthma, and it varies from the time of year. So in the summer I get very little asthma if at all, but there are certain triggers in the winter that will bring on my asthma. Such as cold weather, and wind. If I go out in the wind that’s bound to bring on asthma.

I can generally keep my asthma under control by taking daily inhalers. When I get asthma I can usually keep it down. But there are occasions, particularly if I get a cold or chest infection then none of the normal medication will do anything. So I have to go to the doctors and get steroids. And after two or three weeks it will go back to normal. He also gives me some antibiotics because it’s normally a chesty cold and that is not good for asthma at all.

David was told his asthma was triggered by and made worse by smoking. His doctor strongly advised him to give up smoking

David was told his asthma was triggered by and made worse by smoking. His doctor strongly advised him to give up smoking

View topic summary
SHOW TEXT VERSION
PRINT TRANSCRIPT
Over the years it’s got worse. You know, I’m aware it’s got worse. And my lungs have got a lot worse as well. I’m not hiding it. My asthma really developed through smoking.

I don’t smoke now of course, because I’d be dead if I did. But yes, my asthma really developed. If I hadn’t smoked and I gave up cigarettes an awful long while ago, but then I went onto cigars and that really ruined my lungs completely.

You know, I’m quite happy to admit that now. But I didn’t realise it at the time of course.

And did you quit smoking after or before being diagnosed or… around that time?

About the same time. I suppose it was about a year or so later.

Okay. And was that the... What was your motivation to quit smoking? Was it…?

Well because the doctor told me I’d be dead in two years if I didn’t.

David has occasionally had to go to the local GP surgery or drop in clinic to be given medication through a nebuliser. He recommends carrying an emergency card that tells other people how they can help you in the event of an emergency.

David has occasionally had to go to the local GP surgery or drop in clinic to be given medication through a nebuliser. He recommends carrying an emergency card that tells other people how they can help you in the event of an emergency.

View topic summary
HIDE TEXT
PRINT TRANSCRIPT
I’m very lucky with my asthma. Because as I said, in the summer I hardly get it at all. But its sometimes, it’s bad in the winter, and there have been times, not many, not more than about six, where I’ve had to go to hospital, or go to the doctor, if the doctor’s surgery’s been open. And have a nebuliser.

And I can remember one particular occasion when I was working and that particular day to quite early in the morning. I think it was about one or two o’clock in the morning and I was having difficulty working. I didn’t tell anybody at work. I didn’t tell any of my colleagues what was happening, but I should have gone upstairs in this room, which was on the second floor of this very Victorian town hall. And it was quicker to get to this room without using the lift because you had to walk a long way to get to the lift. And I started going up the stairs and I had to turn round and come down again.

You know, because she’s probably seen it all before.

Because you were short of breath?

Yes, I could hardly talk. One can get into that situation where you can’t talk at all. And that is why now Asthma UK have developed cards that if somebody sees you in the street with an asthma attack and you can’t talk a lot of it is written down on a card what to do.

Oh really. Oh. Do you carry these cards or…?

I’ve got some yes.

Because I give them out. I have to admit I don’t carry one round with me all the time.

But some people, as I said, some people do, because their asthma is far worse than mine, and I don’t think any two people are the same with a situation of asthma.

I mean some people have to carry oxygen around with them.

But I’m fortunate, I’m not in that position.
Previous Page
Next Page