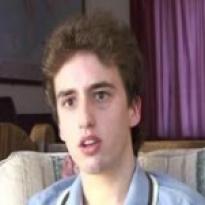 Age at interview: 18
Age at diagnosis: 5
Brief Outline: David, age 18, was diagnosed with asthma at age 5. He is white British and currently lives at home with his parents and his brother. He is at school studying for A-Levels and plans to go to university. David’s mother thinks that his asthma was triggered by a really bad cold. His asthma is mild and he is not on regular medication. He sees a specialist nurse once a year for check-ups.

David was diagnosed with asthma at age 5 and his mother thinks that it was triggered off by a really bad cold. His grandmother also has asthma. David’s asthma is mild and he is not on regular medication. He tends to use an inhaler but mostly when exercising. He sees a specialist nurse once a year for check-ups. Cold weather does affect his asthma and hence he makes sure he uses appropriate clothing when going out in order to avoid catching a cold which inevitably triggered an asthma attack if he did get one.

His parents have supported and guided him throughout about how to manage his asthma. He was encouraged to take his inhaler wherever he went and to take up swimming and other sports on a regular basis. David thinks that exercise has greatly helped him to keep his asthma under control. Based on his experience he highly recommends that other young people with asthma should take up sports to keep fit and active.

If he feels his chest tightening up he has learned to keep calm because he says that ‘fear’ tends to make the condition worse. He also tries to breathe slowly and deeply because shortness of breath does not help his asthma either. Sometimes this breathing exercise is enough to open up the air passages in his chest but on other occasions he needs to take his inhaler.

He has had not needed to take time off school because of his asthma. David says that neither his school nor social life have been affected by his condition. Most of his friends know that he has asthma.

David has work as a volunteer in the ‘Kick Asthma’ summer camps and highly recommends them to children with asthma and other allergic conditions.

David volunteered at a Kick Asthma camp as part of the Duke of Edinburgh award. Seeing that other kids have the same kind of troubles and worries is important.

David volunteered at a Kick Asthma camp as part of the Duke of Edinburgh award. Seeing that other kids have the same kind of troubles and worries is important.

View topic summary
SHOW TEXT VERSION
PRINT TRANSCRIPT
I found out about Kick Asthma UK through doing the Duke of Edinburgh awards. ‘Cause for my gold Duke of Edinburgh award I had to complete a residential section where I have to spend a week away helping like helping at a youth hostel for example. So I found it on the Duke of Edinburgh Award website and then I contacted [name] and basically he wrote back to me and gave me information about it and I said I wanted to sign up as a volunteer. You know so go down and fill in a few forms. So I found out basically through [name]. It’s how I found out really about Kick Asthma and he was really helpful. He’s a really good manager.

Kick Asthma. Oh it’s a, it’s an organisation which is set up to help kids with asthma, help manage their asthma. But it’s not only asthmatics, eczema and anaphylactic reactions, allergic reactions to things. And yeah. So basically it’s. The holiday’s run, it’s like different holidays spread out through the summer each year at different locations like five. And then kids from all across the country could come to them and like learn about their asthma and mingle with kids who have the, the same kind of like disabilities who they may not be used to hanging around with to see that other kids do have the same kind of like, same kind of troubles and worries that they do. So it’s basically just to reassure them that they’re not the only ones who have a certain type of reactions. Basically it’s to reassure them, yeah, they’re not the only people who have like worries about asthma and eczema.

But yeah it’s a really good organisation. The volunteers and leaders can like help like help the kids, like feel reassured about their asthma and do activities where they can get involved without worrying about their asthma. So it’s basically just keeping it in check.

David has learned that it’s important to stay calm when you’re having an asthma attack. If you keep things calm ‘you feel that you’re in control of it. You know what to do. You can deal with it’.

David has learned that it’s important to stay calm when you’re having an asthma attack. If you keep things calm ‘you feel that you’re in control of it. You know what to do. You can deal with it’.

View topic summary
SHOW TEXT VERSION
PRINT TRANSCRIPT
Well [laugh] I don’t know if it’s the best solution but who told me? I don’t know I’ve always, I presume my parents probably told me to not, never to like panic whenever I have an asthma attack and GP doctors tell me as well. And it’s also, [snap] I think it’s also recommended on these Kick Asthma holiday camps.

So what do you need to do?

Just keep calm. I think probably if you start to panic I think the asthma then maybe gets worse ‘cause you kind of like panic. You’re not thinking straight. So you may not reach for your inhaler. You may, I don’t know start to panic, start not thinking straight. You’ve just, you’ve just got to keep calm, just keep calm. Breathe slowly and deeply. Try to calm your breathing down. I think shortness of breath doesn’t help the asthma either so you try and like breath calmly, breathe deeply and it helps your asthma. But yeah so just keep calm. It’s really that’s the advice I can give.

So that gives you a sense of control?

David says younger people may have lots of questions about asthma and need to be given lots of reassurance and information.

David says younger people may have lots of questions about asthma and need to be given lots of reassurance and information.

View topic summary
SHOW TEXT VERSION
PRINT TRANSCRIPT
How to treat the asthma really and what affects asthma. I think doctors and nurses should be able to convey these ideas to the patient, help to reassure them. I think they need to know basically a good deal about asthma so they can definitely reassure the patient. And say there’s a young child and it may have loads of questions they might want to ask I mean it’s good. Obviously if the doctor and nurse can answer all these questions so probably a good deal of knowledge is probably recommended. Yeah.

Well obviously it would be good if they knew how to, how to use certain equipment, inhalers and peak flow meters for example. So they can make sure the patient is using them correctly and they also advise and teach them how to use it.

Any issues about when they communicate with young people?

Yeah just be friendly, be friendly, reassure them because the kid’s obviously going to be like, have loads of questions about the asthma and going to be really panicking if the doctor and nurse can’t answer their questions ‘cause they’ll feel that people don’t really understand and maybe that’s. Maybe they’ll feel more reassured if people do understand what’s going on. So they feel reassured that people can help them. So basically it’s just be polite, be friendly to the patient or the child or adult with asthma. Just reassure them really I think. Help to keep them calm.
Previous Page
Next Page