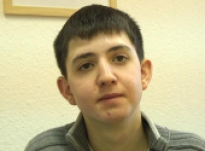 Age at interview: 17
Age at diagnosis: 7
Brief Outline: Joseph was diagnosed with enthesitis related arthritis at the age of seven. After initial remission his condition flared up again and it became more difficult to control. He was started on Enbrel (etanercept) and has been on remission for the last two years.
Background: British

Joseph's arthritis was triggered by an episode of food poisoning when he was seven years old. Joseph's condition is genetic, and he carries a particular type of gene that made his immune system over-react to the food poisoning. He remembers his joints swelling up and being in pain. He was put on steroids and given pain relief tablets. He also started physiotherapy.
He found it strange to be diagnosed with arthritis and having to use a Zimmer frame. He said it was strange because you don't see many seven years old using Zimmer frames or going to school in a wheelchair. At school he found it embarrassing because he had to be pushed around all the time. After a year of treatment his arthritis went into remission and Joseph came out of the wheelchair again.
Joseph had a relapse when he was 13 years of age. He was experiencing a lot of pain and the doctors put him on methotrexate to try and relieve the pain and get him back in remission. He was on that drug for about three years. He says that methotrexate wasn't really working as he was still experiencing a great deal of pain.
During this period he found it very difficult to manage school. He had problems walking and was unable to sleep at night because of the pain. His feelings at that time were of frustration, sadness and anger. His parents and grandparents have been a great source of support and encouragement throughout his experience. He continued attending school and was determined not to give up. Joseph has always felt accepted by his peers and he did not experience any bullying or discrimination at either primary or high school.
Due to the severity of his condition he was referred to a specialist Adolescent clinic in another city and funding was obtained for him to go onto a new treatment. He was started on Enbrel (etanercept), a drug that it is fully licensed for adults but not yet for children. Joseph decided to stop taking methotrexate and says that the team at the clinic respected his decision but made him aware of possible problems. He has always felt very well supported by the team at the Adolescent clinic. For the last two years Joseph has been in remission.

Joseph has been in remission for two years. He no longer experiences any symptoms. His biggest...

Joseph has been in remission for two years. He no longer experiences any symptoms. His biggest...

View topic summary
SHOW TEXT VERSION
PRINT TRANSCRIPT
My biggest fear is in a way is this point in time. Because it’s been in remission for two years is, “Will it ever go back?” Because there’s always a risk that you’ll relapse and there’s always a risk. Obviously they’re going to start eventually taking me off all my medication that when they do you could relapse. And it’s such a transitional stage anyway with moving away to university next year that the last thing you want is to go into remission again. So I suppose that’s my only worry. But I try to keep positive and look at what I have now and where I was before and just keep positive and hope that everything keeps moving in the right way.
What have the doctors said to you?
They with it being in remission for two years they say it’s a good chance that it won’t relapse but with it being such a volatile illness there’s always that risk. And they would if it wasn’t for my exams and going away to university start taking me off some of the medication now. But we’re going to wait until I get settled at university and then start cutting back the injections and the other medication that I’m on. And hopefully it should stay in remission but there’s always an element of risk.

Joseph has a flare up when he has done something physical, like walking to the shops. He does not...

Joseph has a flare up when he has done something physical, like walking to the shops. He does not...

View topic summary
SHOW TEXT VERSION
PRINT TRANSCRIPT
And tell me about how the pain, where sort of episodes of pain just sort of flares and then?
Yeah. It was flares and I could do something and say just walk to the shop and the next day I’d be in absolute agony. I was determined to do it but the next day I’d be in agony or I could just wake up and have really. My, my legs could be really stiff and I couldn’t be able, you know, walk even down the stairs. I can remember my back once when I was walking home just locked and I had to, you know, just sit down and get the bus and just. You know it was weird how it just, you know one day you can be fine, the next day you can have really, have a flare up. And it was really like that until I was in full remission like I am at the moment.
So for how long did the pain last?
It could last for a day, it could last for a week. Seemed endless. It was so volatile.
And which part of the body?
It was mainly my ankles and knees. So it’s probably the worst area to get pain ‘cause you’re on your feet all day at school and you’re walking around all day. And you just want to sit down but you can’t.

When Joseph was 10 he went to an adult clinic. He later went to a children's hospital and found...

When Joseph was 10 he went to an adult clinic. He later went to a children's hospital and found...

View topic summary
HIDE TEXT
PRINT TRANSCRIPT
When I went to [city] it was just that I’d been in such a, a small clinic in [town] with all the old people and they didn’t. Although I was ill and in pain I didn’t feel that I was really ill because when I was going to a children’s hospital in [city] I thought it’s a children’s hospital. It’s going to be, you know, you see on the TV all these really, really ill children and I didn’t associate myself with being like that. Obviously I was but I didn’t feel like that because I’d never been aware of how ill I was. Although I was in pain and everything and I just didn’t feel that I was one of those ill people that you see in the children’s hospital.
There are two things that I wanted to ask. One is you just mentioned you were in a small clinic and there were a lot of old people...
It was an all-adult clinic.
How did you find it?
It was not very, I don’t know what the word is, pleasant. I remember once I went to the desk and said, “It’s Joseph [surname] in. My mum’s just parking the car.” And he said, “Oh is it your mum that’s seeing the doctor?” And I said, “No it’s me”. And I remember thinking that was a bit strange ‘cause I was the patient but they thought that my mum was the one that was the patient. And being with old people when you’re 10 you don’t really think it’s, you know, they don’t think it’s you. Doesn’t feel quite right.
So you were staying on the ward when you checked in to?
I was in a children’s ward but the after clinics were all-adult, rheumatology clinics. So I was a rarity.
And how did it feel to go to a children’s hospital when you saw people more of your own age?
It was, it was strange ‘cause I’d never seen anyone else with arthritis so it was a completely new experience meeting people. And I went on the weekend organised by the CCAA, the charity for children with arthritis, meeting all these other people and talking to them. And it was strange because I’d never met anyone or talked to anyone. And realising there was people going through the same thing as you was, a relief in a way because you didn’t think, oh it’s just me. ‘Cause you had all these other people that had been through the same thing and, and come through the other side so it was a relief to meet people that were in a similar condition.

Joseph used to get frustrated with being tired and waking up in the night. He lacked energy but...

Joseph used to get frustrated with being tired and waking up in the night. He lacked energy but...

View topic summary
SHOW TEXT VERSION
PRINT TRANSCRIPT
And any other feelings? Were you frustrated or angry or sad?
I got very frustrated that I was reliant on people. I liked to be independent. Do my own things but I was very frustrated especially when I was tired, waking up at night. And then coming home and just collapsing on the sofa with tiredness, you know. It’s very frustrating just not having been able to do what you wanted.
Or having the energy to do it?
Yup not having the energy.
Tell me more about fatigue because I know that pain is very debilitating?
Yup. I remember when I was in primary school and it was. By the time I got to lunchtime I was just so tired because I was working so hard just to keep going and, you know, not let the pain get me down. And in high school I was so determined to go to school and so determined not to miss things that because I was trying so hard not to just give up. You’re just working overtime and doing double what everyone else is doing just to keep on top of everything and not miss any school or miss anything. So with the pain as well it just makes you very, very tired. And I was very pale, lost a lot of weight. It was extremely hard going to school in the morning after being up all night with pain.
And I didn’t, I had to get the bus home every day ‘cause I couldn’t walk and I didn’t like it being on the bus, the rowdy school bus. You’re really tired and just want to get home. Didn’t and it’s just I didn’t like it at all.
Previous Page
Next Page