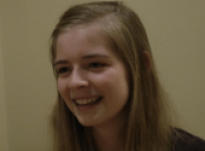 Anna is a thirteen year old girl who has juvenile idiopathic arthritis. She was diagnosed four months before being interviewed. Her arthritis is not currently being controlled by her medication.

Anna is a school student. She lives with her parents and brothers. She is white British.

Anna is a thirteen year old girl who has juvenile idiopathic arthritis. She was diagnosed four months before being interviewed.
Anna woke up one morning to discover that her wrist was very swollen. By the end of the day her wrist really hurt. Anna said that it was the worst pain she had ever felt. Her parents made an emergency appointment to see the GP. The GP suspected that Anna had a broken wrist. Anna had blood tests and x-rays at the hospital but everything came back normal. Anna’s parents paid privately so Anna could see a rheumatologist. The rheumatologist scanned Anna’s joints using ultrasound methods. After the scan Anna was told that she had arthritis. Anna’s rheumatologist gave Anna oral methotrexate to take one a week.
Anna says that the methotrexate is not helping her very much. She also feels poorly after taking the medication. She gets heart burn, acid reflux and feels sick for most of the week. A new consultant has suggested taking a stronger dose using injections instead of tablets. Anna is keen to try this.
Anna has always been sporty and was particularly fond of sailing. She hopes to continue her sporting activities in the future when her arthritis is under control.

When Anna had an ultrasound she said that the gel was cold but it did not hurt. She got to see...

When Anna had an ultrasound she said that the gel was cold but it did not hurt. She got to see...

View topic summary
SHOW TEXT VERSION
EMBED CODE
PRINT TRANSCRIPT
Do you have any other tests like MRI or did you have ultrasound or anything of that nature?
I had ultrasound on a lot of my joints and she like moved my joints around, had like a feel of my joints and just yeah.
They put a gel on the joint or whatever you're having x-rayed, ultrasound and it's just sort of…it looks almost like an electric shaver but it doesn't hurt, they just wipe, just rub it across your joint and it shows, you can, she showed me the screen and you can see the inside of your joint with all the muscles and all the; and you could see, for the arthritis you could see the fluid in the joints which is, it was, it was like different coloured dots and the more coloured dots you have, the more fluid it was in the joint. So that's how he knew.

Anna went on a school trip to Germany without her crutches. She was in pain and had difficulty...

Anna went on a school trip to Germany without her crutches. She was in pain and had difficulty...

View topic summary
SHOW TEXT VERSION
EMBED CODE
PRINT TRANSCRIPT
Have you ever found that you got half way through the day and then needed crutches?
Yeah a lot.
What happens then?
Well I was on a school trip in Germany in mid-December and I was told that there wasn't going to be a lot of walking and there was. So we spent twelve hours on a coach, got there and went straight out in the freezing cold in Cologne walking around the markets and it was probably a mile to the markets, a couple of miles round and a mile back and then that night I woke up at about half one in the morning and I was in so much pain. My ankle was bigger than it's ever been before and I didn't have anything there. I had like painkillers but they don't help and I had bandages but they don't really help so that was a very sticky situation.
That sounds terrible. So you just had to just wait until..?
Well I was in a room with my three closest friends and then, but they were all asleep and I didn't really want to wake them up so I just tried to get back to sleep and then I eventually did get back to sleep and then in the morning the group leader of the trip was, in my eyes, quite harsh. She said, "Oh well you're going to have to stay in the youth hostel by yourself all day because we can't…" even though my friends were prepared to stay with me, she was like, "Well they've paid for the trip so we have to let them go." But then two of my friends they carried me around Cologne for the whole day so I did go out.
What was that like?
It was quite fun because they just sort of acted as my crutches for the whole day.
Did they enjoy it?
Probably not as much as I did.
They sound like good friends?
Yeah
Previous Page
Next Page