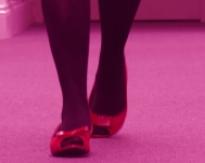 Age at interview: 17
Age at diagnosis: 7
Brief Outline: (Text only clips) Imogen has had alopecia since she was 7. Her mum found some bald patches on her scalp and the rest of her hair fell out within two weeks. Imogen was offered steroids by doctors but decided against them, choosing instead to try aloe vera products.
Background: Imogen is 17 years old and an A-level student. Her ethnicity is White British.

Imogen’s alopecia began at the age of 7. Her mum found some bald patches on her scalp and the rest of her hair fell out within two weeks. Imogen doesn’t remember much about what was going on at this time, although she says that her first episode of alopecia was caused by the stress of an argument she had with a close friend. Imogen has had periods of regrowth, such as when she was 10, but found that patches of alopecia kept returning.

Imogen was offered steroid treatments by her doctors but she decided not to take them because of low success rates. She feels that talking to someone else who has alopecia can sometimes be more helpful that repeatedly going to the doctors. Imogen currently uses aloe vera products which she feels have helped her hair regrow. She has patches of regrowth but chooses to shave all her scalp hair off. This is because she finds it easier to wear wigs than to worry about others seeing the bald patches, especially when it’s windy outside. She buys her hair pieces privately as she thinks that NHS wigs are lower quality and she’s concerned by a rumour that these are made from animal hair.

Imogen was bullied by other students at her secondary school. It began with some of the pupils making comments about her having a high hairline and the bullying became violent. Imogen thinks that most people didn’t know “how to deal with me because they thought I was different”, even though hair loss was the only change. Imogen suffered from depression and anxiety partly to do with body image and self-esteem issues. She says that doctors offered her medication for depression but she didn’t want to go down that route. She took some time off school and says that the period really affected her friendships and the people around her. She made the decision to move schools in Year 10 and found that both the pupils and teachers there were much more supportive.

Although some of her experiences have been very difficult, Imogen feels that these have helped mould her into a more positive and non-judgmental person. Imogen’s mum and nan have been very supportive throughout. However, she says that most of her dad’s side of the family don’t acknowledge the fact that she has alopecia, even though they have seen her bald. Imogen wants to help other people with alopecia and she plans to start her own YouTube channel for people about dealing with hair loss to share her own past struggles and give advice to those suffering from depression and anxiety. She also recently started modelling and hopes this will increase the number of confident images of people with alopecia. Imogen’s advice to doctors and teachers is to provide more emotional support for young people with alopecia.

Imogen wrote an article online about her experience of stress triggering her alopecia. She was upset by the response of other people with alopecia who disagreed with her.

Imogen wrote an article online about her experience of stress triggering her alopecia. She was upset by the response of other people with alopecia who disagreed with her.

View topic summary
HIDE TEXT
PRINT TRANSCRIPT
In one of the questions, I think it said, “What is alopecia?” Then I replied something like, “Alopecia is an autoimmune disease caused by stress.” And obviously that isn’t-, that was something that a lot of people didn’t like. So that caused a lot of arguments but, to be honest, that’s my opinion.

Imogen has patches of alopecia. She prefers to shave her head and wear a ‘hair piece’ (wig) because the patches are difficult to cover.

Imogen has patches of alopecia. She prefers to shave her head and wear a ‘hair piece’ (wig) because the patches are difficult to cover.

View topic summary
HIDE TEXT
PRINT TRANSCRIPT
I’ve got alopecia areata and the difference between the two: alopecia universalis is basically you lose all your hair and alopecia areata you just lose parts of it. So I know to this day I have alopecia areata but I’ve just got bald patches over my head, but I just choose to shave it and wear a hair piece and cos it’s easier than going into the wind outside and all of it [laughs] you know flying about, and people can see it.

Imogen prefers wigs that are thick looking because that is how her natural hair was.

Imogen prefers wigs that are thick looking because that is how her natural hair was.

View topic summary
HIDE TEXT
PRINT TRANSCRIPT
Well the company I get my hair system from is basically like a hair salon. You go in and you get like measured, your head measured and you’re given sample of about 40 different hair colours that you can choose straightaway, or you can go home and send, oh gosh I’m trying to think what his name is, gosh it will come to me. So you send the owner the photo of like the hair style or you can send two individual photos of the hair style you like and the colour, so I did that for this one. Then obviously I wanted the thickest hair because I really like big hair and I think that’s because when, well before my hair first fell out I had blonde brown hair, well light brown blondey hair and it was really thick. So having had that taken away from me [sigh] that’s obviously made me have a love for like thick hair. Like I don’t know, I feel more confident and I feel more [sigh] at ease with a lot of hair you know. So currently I have the longest hair system you can get without all of it, all of the hair easily falling out. And the thickest so I kind of like this though, it suits me more than my other hair system. I will show you my other hair system actually. And I look a lot more older.

Imogen was verbally bullied and feels she didn’t get the help she needed from her school.

Imogen was verbally bullied and feels she didn’t get the help she needed from her school.

View topic summary
HIDE TEXT
PRINT TRANSCRIPT
Well referring back to the person who bullied me, she, once she found out about my alopecia she would, she bullied me even more and that made my alopecia become worse to the point where I just had two strands of hair either side, and I would always have to wash my hair every day so it would stay in that position, you know. I would get mocked all the time by her and her friends that I had a big forehead because obviously when my alopecia fell out the first time my hairline grew back a lot further than before. I got bullied about that a lot which really affected me. But looking back on it now I feel like I wasn’t one of those people that didn’t ask for help like off teachers and stuff for like bullying. But I just didn’t get the help I needed. And I feel like a lot of people speak out about the situation that they’re going through don’t get the help needed, and I feel like that’s something the school system needs to work on.

View topic summary
HIDE TEXT
PRINT TRANSCRIPT
When I first started modelling, I applied for an agency and, even though I’m not with them anymore they sent me to [photography studio], I think it’s called, in [city]. I basically had my test shoot and it was over and done with as far as I was aware, so we went into a little room, me and my Mum, and we were talking to this lady who worked there about what my reasons were and everything for starting modelling. And I mentioned to her my reasons and that reason is to help people, other people with alopecia, because I myself have alopecia. It was obviously a longer description than that but I’m trying to keep it simple. Then she was like, “Really, well why didn’t you say? We will get you back into the studio.” Then I was like “Ah, okay.” So I went back into the studio, they closed down for about an hour and a half so there was just me in there and, yeah, I just did some photos. That photo that I showed you included, yeah.

So the first test shots had been with your wig?

And then the second ones were- [without your wig]?

Totally unexpected, I didn’t think that would happen but I’m glad it did.

I also use Instagram and that helps me a lot when I do like a photo shoot or I need to like spread awareness about alopecia, I would just put a post up a photo. Yeah then people start following me who have alopecia.