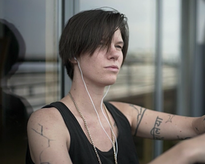 Reuben came out as trans non-binary after feeling uncomfortable for many years with his body, particularly the changes that were happening through puberty.

After finding it really difficult to get information about how to medically transition from the NHS website or how to approach his GP about being referred to a gender specialist, Reuben found information from online forums where he found it helpful to compare experiences.

Reuben decided to see a gender specialist privately to talk about medically transitioning and the effects of hormone therapy. His experiences of contacting the private gender specialist have been very positive, particularly he felt they were spoken to as an individual rather than as another patient.

Reuben would like GPs to understand how important gender identity is to people and how it affects their whole life and for it to be taken as seriously as any other issue a patient comes to see them about.

Reuben thinks it’s important for young Trans people to have a space safe where they can talk about their experiences and how they have been feeling.

Reuben’s experience of online communities is that you’ve got to be careful as there can be misinformation about trans and non-binary people. He said it’s important for young trans people to know that everybody’s journey is very different. There is not one journey that a trans person can go on and whatever route is taken it is still valid whether it be no medical transition or hormones or surgery.

Reuben talks about their experience of support at university getting their name updated and the support from the Students’ Union.

Reuben talks about their experience of support at university getting their name updated and the support from the Students’ Union.

Uni has actually been really great which I was surprised by I have my tutor has made sure to email all my other lecturers and things, my name’s been updated as well on the system even though it hasn’t legally been updated by deed poll there’s the notes and stuff put on the system. I’ve been also given mental health support as well which I was quite surprised by because I know that’s under massive strain at the minute but that was offered to me as well in case I find like getting on with my studies difficult when I’m having periods where I’m not feeling great about myself, so Uni’s been amazing yeah.

Well that’s good to know. And what’s been most important about, do you think University and their services?

It’s just been nice to have a safe space to be able to go it’s, I think it’s important for Trans people to be able to have a space as well to talk about how they’ve been feeling instead of just having to shut up and bottle it up and not talk about it and act like everything’s fine. Because being trans comes with, it’s great but it’s also really difficult when you live in this type of world so it’s really important to have a place where you can talk about things and your experiences and stuff and we’ve got a Student Union as well which has got I think we’ve got three, three Trans people and we’ve got a lot of different identities, we’ve got gay, bisexual, lesbian and I go to that every two weeks which is really great just to have that little community as well to talk to and have a laugh about stuff that you can’t laugh about with other people, so yeah Uni’s been good

Reuben describes his experience being misgendered by his GP ‘[it] was a pretty horrible experience’.

Reuben describes his experience being misgendered by his GP ‘[it] was a pretty horrible experience’.

I initially did go to my GP which was a pretty horrible experience I booked in with a GP that wasn’t like my regular GP and I sort of sat down with them and said that I’m having these feelings and I want to be referred to like the NHS road of things and he sort of just didn’t make eye contact with me at all he still carried on like calling me she and things and [name] and stuff, like my old name then he said to me, it was like, ‘So do you, do you want to be a boy then?’ and I said ‘Well I am [laughter] I am trans I do identify as like the masculine sort of Trans guy’ and he just sat there like really confused not knowing what to do and he said ‘Oh I’ve never done this before so I don’t, I don’t really know what I need to do’ and I was like okay [laughter] and he went out the room and left me for quite a while and I’m just sitting there on my own in the appointment room and he came back with these sheets and he was just like ‘Okay you need to go home and fill these out and bring them back’ and I was like ‘Okay’ [laughter]. He didn’t even like do it with me or anything like that, but yeah that was my first experience [laughter].

Reuben discussed the side effects of hormones with their clinician.

Reuben discussed the side effects of hormones with their clinician.

I was able to sort of talk to someone at Harley Street just over e-mail asking for more information about hormones and things because I, I was unsure about what I was actually getting myself into if I did get hormone therapy. So they sort of spoke to me about obviously how my body is gonna change and things if I begin them sort of talking about risk factors as well but other than that I didn’t really get any more information about it

So what did you make from what she said about hormones?

I think it was good because she didn’t try to make it all flowery and pretty she was very real about it and she said that there are gonna be some negative side effects with taking hormones and it needs to be something that is taken very seriously and as well she mentioned too that a lot of Trans people because the waiting times are so long they actually go out of their way to find hormones in other ways by getting them like illegally or whatever which isn’t safe and she told me to like to stay away from that and to keep safe and things which I’d never even thought about but obviously a lot of people won’t be able to afford to have these meetings with hormone specialists and things and that is the only way that some people can do it.

Reuben said ‘it does make you question yourself and your own identity… it makes you feel invalid’.

Reuben said ‘it does make you question yourself and your own identity… it makes you feel invalid’.

It really makes, it shouldn’t but it does make you question yourself and your own identity because you feel that way anyway without people coming on the television and telling you that. But when you are bombarded with the media saying all these people are just going through a phase they’re gonna wanna detransition and they’re gonna be stuck like it forever and all this, all this stuff it really, it makes you feel invalid you start to, people start to perceive you in a negative light as well and I think the media have done a really poor job of Trans representation and they’ve really tainted the Trans identity by making it almost as a joke and it’s ridiculed a lot.